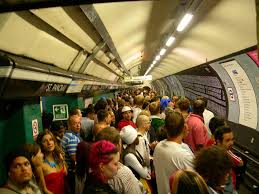 In a round table monthly meeting this morning, one of our researchers started talking about a new new app he was building that would enable passengers on the London Underground to meet each other digitally and then perhaps physically, by playing games with each other on their smartphones. The idea was to make more of the idle time sat on a tube train by enhancing the wi-fi connections through using data given out from passenger’s smartphones. This could be combined with personal information about a passenger they had signed up for to signal availability to play. The app would ask some questions first that when answered allow it to match with someone else in the same carriage.

Before the researcher could explain the technical details of how this system would work (that he was most interested in), arms were raised throughout the room – troubled by the very idea of using phones to connect with strangers on the tube. While the idea of hooking up with strangers using phones is not new, e.g. “toothing” (a great hoax when Bluetooth first came out that claimed people were connecting with the opposite sex using it on the tube) it hit a raw nerve amongst fellow researchers. One student shot her hand up and said while the researcher’s motive was well intentioned his assumptions were wrong. Most people want to be mindless, i.e. not talking or playing with strangers, when sardined together on a tube – choosing to spend the time playing games by themselves on their phone; reading a book or the free daily Metro newspaper; daydreaming or simply just in thought. The last thing they want to discover is some creepy guy sitting opposite them, digitally signaling to them that they want to connect and play a game.

Tubes are horrible spaces that most of us are only too glad to escape from as quickly as possible. And as it can turn out, can become a melting pot that can quickly turn very unpleasant.

Later that afternoon, on my way home, I got on the Victoria Line at Warren Street heading to Victoria. At Oxford Street there appeared to be a bit of a disturbance as the doors closed and I switched my gaze to its source. A woman in her 30s had stood up to offer a seat to a man in his 50s, who was wearing dark glasses and walking with a stick. A waft of alcohol breathe permeated the carriage. He was clearly worse for wear. He raised his arm and told her to “sit down, women should not have to stand up.” A young man opposite her quickly stood up and offered his seat instead to the man. She sat down again. The man lurched forward and nearly toppled over. Several other passengers came to his aid and helped him into the vacated seat.

Two seats from him on the opposite side of the carriage sat a priest in his 70s minding his own business. He was easily recognizable by his purple shirt and dog collar. The man looked at him and started shouting abuse and ridiculing him, “hey you going to Westminster to do your penance? You need to do your penance. Ha ha.” The priest leant forward and replied gently “what for?” The man was affronted by his gentleness and started swearing even more profusely, f-ing this, f-ing that. On he went. “You don’t believe in that Jesus shit?”. The priest withdrew and looked the other way. Then another man sitting opposite me entered the fray and shouted at him, “hey stop swearing, there are other people on this train.” We all looked at him in amazement, only too aware of the regularly reported horror stories of passers-by being knifed, shot, hit or abused when daring to intervene. The drunken man glared at him and retorted, “mind your own fucking business! Who the fuck do you think are you?” The other man replied, “I am a police officer! Look, here is my badge.” He took out his police badge from his pocket and showed it to him. The other geyser went ballistic, “so fucking what?” He wasn’t a f-ing fighter like himself and he couldn’t care whether he had a f-ing badge or not. At which point the atmosphere in the carriage became electrified. In between abusing the off duty cop he kept repeating that a woman should not have to stand up for a man.

Victoria station arrived and most of us got off except the geyser who sat muttering, head shaking and continuing his tirade. I was struck by his old fashioned respect for women but lack of respect for others in cloth, amplified by booze. Here was a veteran, probably from the Gulf War, two days after D-day ceremonies, oblivious to accepted social protocol.

There is no way a mobile app is ever going to bring strangers together on the tube to chat or pass the time away being more mindful of each other. Only yesterday, I was in a carriage where some guy asked a smartly dressed guy in suit and tie to turn his beeper off on his smart phone. It was annoyingly loud and every key he pressed on the screen resulted in a loud beep. The man did not even look up and shamelessly said “I don’t know how to.” There was no answer to that.