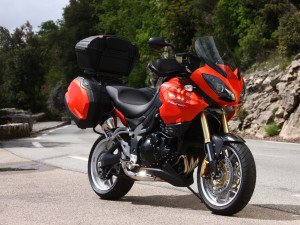 I’ve always been terrified of motorbikes, ever since one of my college friend’s got knocked off her Honda 50cc, when she was just 16 years old, and tumbled over the bonnet of the car that hit her. She survived suffering only mild concussion and bruises but another colleague’s wife died in her 20s, when she was knocked off – as a pillion – from his bike. So, it was with much fear that I agreed to go on the back of a bike – a bright orange powerful Triumph Tiger – to visit a winery in the Mornington Peninsula. The build up and banter amongst the Melbourne crowd who had set me up for this made me even more terrified.

Kitted up in all the gear and having listened to the basics of being a pillion, I stepped onto the bike behind my friend and confident driver, Steve. I trusted him 100% to drive safely and for good reason. You are at their mercy. There needs to be good body talk and understanding as you can’t chat or see eye to eye once on the move. Tapping on the shoulders means stop – like pulling the safety cord. I was determined not to have to do that. 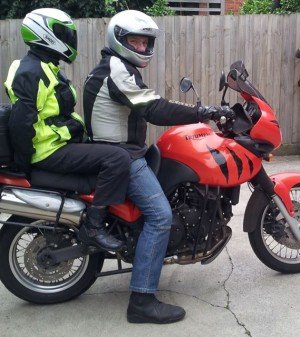 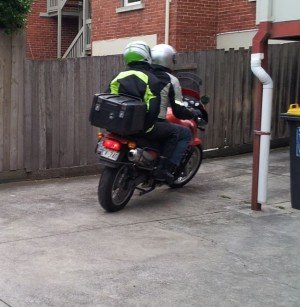 After saying farewell to the others, who were driving there in the car, we whisked off up the driveway and immediately came to a roundabout. My arms and body were shot and taut with adrenalin. First test within seconds: was I leaning enough, should I look to the left or right or bury my head in Steve’s back. So many mini-fears raced through my mind. And it seemed like my inner thoughts were shouting at me – being amplified under my helmet. The next 10 minutes were sheer terror – when I dared not look at anything except Steve’s silver helmet in front of me – which I kept hitting with mine as we braked. 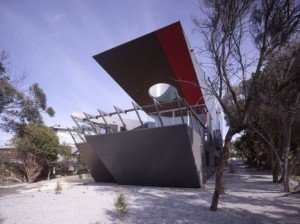 And then slowly, I started noticing the scenery, the amazing modern houses along the coastline, the beaches, the other drivers, the curves and inclines in the road. It was fun to be peeping at the world as it whizzed by. I started enjoying leaning round the bends and the umph from accelerating and zipping in and out of the traffic. I felt so vulnerable and yet so free at the same time. And so enclosed (with all the protective gear on) and yet every now and again could smell fresh grass in the fields or raw petrol coming from the car exhausts – that I had not experienced before, with such intensity. It was all so precarious and yet so enthralling. Knowing one had protective gear on that could help save us from brain damage or ripped skin was reassuring. But also knowing a margin of error by another driver could be curtains for both of us was unnerving. The tension, contemplated at speed, added to the thrill. I got it – for what it means to be a biker.

Another dream fellow has been researching thrilling interactions as part of his work on new forms of entertainment. He has conjured up, in collaboration with a number of artists, ever more amazing experiences, including a new form of interactive thrill ride that is controlled by a person’s breathing. His take is to deliberately use discomfort as a way of enhancing the excitement. It seems the more frightening, scary, dangerous and uncomfortable, the better.

A thrill begins with the much feared anticipation, followed by an extreme physical sensation, and then the euphoria of relief at having survived the experience. That sums up my experience to a tee. But why do we keep seeking novel thrills? It doesn’t seem natural to put our lives at ever more risk by deliberately scaring ourselves shitless. One theory is that such feelings of thrill fill the void that has come about through civilisation. We crave powerful emotions that somehow have got lost through becoming a modern society. No longer able to hunt or face a roaring tiger we seek out new thrills, like bungee jumping, white water rafting, or riding a motorbike Tiger.

The terror we go through, before, during and after combine together to heighten the actual experience and subsequent memory of it. I may forget what we had for the delightful lunch at the winery afterwards but I will never forget my Tiger Triumph bike ride. 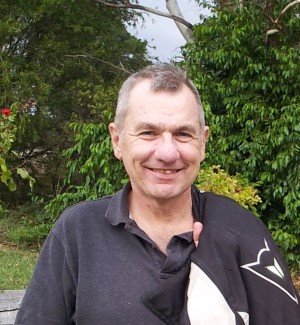