There is an art to selecting a superlative set of adjectives to describe the eating experience of gastronomic dishes – just as there is to explaining the fusion of ingredients and methods used to create them. Reading the captivating and conjuring words for dishes on a menu, then hearing the expanded accounts from the waiters standing next to you bearing plates of delights, primes the taste buds, but recounting afterwards the sensuous and delectable explosion of tastes they elicit can leave the uninitiated fumbling in the dark. The ease and eloquence with which the top chefs judge and comment on the finalist’s dishes of this year’s BBC Master Chef competition puts me in the shade. Instead of trying to compete with the food critics, chefs and foodies, I decided to ask my dining companions to talk about what ever triggered their experience of eating amazingly prepared molecular food.

Three of us went to Roganic, a temporary (pop-up) organic restaurant in Marylebone, run by Simon Rogan and Ben Spalding, and described by John Lanchester (the food and drink critic for the Guardian) as “pop-up on Viagra” with a “fair degree of modernist wizardry”.

We opted for their modest -sized and -priced, three-course lunch.

My companions, Paul and Nadia, started off in fine fettle, describing the free appetizer in terms of its unexpected weight and how it took them completely by surprise, as its texture and shape suggested it should be something else. Paul exclaimed, with animated gesture:

“It was like double surprising, it looks much heavier than it is, you pick it up and you realize it is much lighter than it is…You think it is going to be crunchy because of the crunchy stuff all the way along the top and then you bite into it and it is squidgy all the way through.”

This form of unexpectedness seems to be key to the intensity of subsequent pleasure.

As we moved onto the starters, Nadia began talking about her food colour experience – that neither of us had ever heard of before – and for which her husband thinks she is slightly barmy. She started explaining how she sometimes experiences – without warning – eating food in terms of hues and different shades of beige and brown. She does not know when it will happen, or which foods; it just happens:

“I don’t see it here (points to dish). I see it inside (points to her chest). Beige. I don’t know how to explain it. For me there is a clear link. I can’t cook with it because, if I think about it, it is a totally different experience, as it becomes an association. It comes, just like that, I can’t stop it.”

Back to earth – we noticed on entering the restaurant that there was a large pebble in the middle of each table. It seemed to go against my naïve knowledge of Feng Shui. The waiter smiled when we asked what it was for and said wait and see. We tried to guess – not having read any of the foodie reviews which mention it – but all got it wrong. The waiter reappeared and plopped on it a dollop of hand-churned, Malvern-salted, infused butter. Instead of the usual discreet side-pot of top-sliced butter we had a pièce de résistance – a cream, pearl-wave perched on a powerful rock, overshadowing even the beautifully nested assortment of bread rolls and crisp bread. And it felt beige! 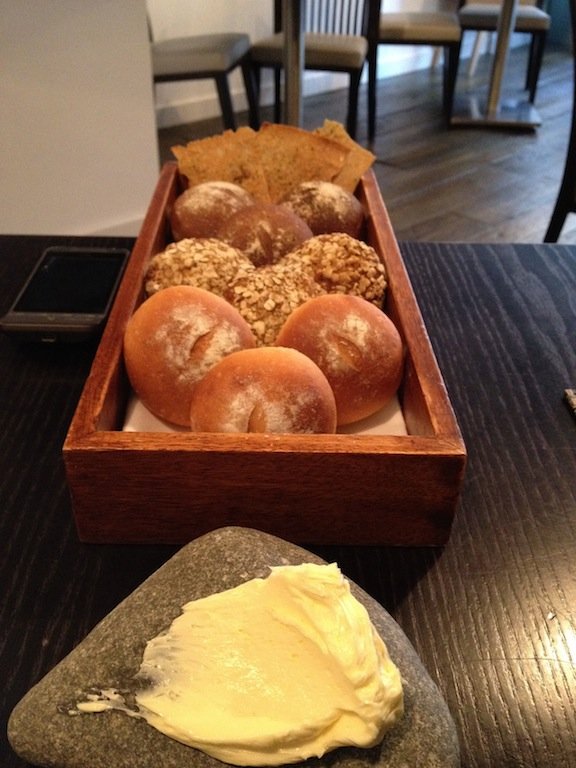 Something as simple as changing the setting makes one see, the often taken for granted, in a completely new light – in this case, bread-spread. We all wanted immediately to scoop it up and then gleefully drop it on to our bread.

The pebbles are handpicked from Folkestone beach by the chef and their cold core keeps the soft creamy butter from melting, but also acts as a good ice-breaker for the dining party – you can’t help but notice it when you sit down. Clever.

I was curious to know how they were cleaned – thinking 30 large stones in a dishwasher might be quite a challenge to balance alongside the plates and glasses – not quite the same as stone washing a pair of Levis. Of course, there is a carefully thought out stone-cleaning procedure, including soaking them every night in salted water, boiling them for a couple of hours each week and lots of brushing and scrubbing afterwards, to make them pristine clean. They even tried baking something on them one time in the oven but several broke so they abandoned that idea. This anecdote of exploding rocks triggered Paul to recall his own about how when he and his wife lit a fire on a big rock to cook al fresco – while camping in the Australian outback. It turned out to be a sedementary stone that exploded in their faces, showering them with pieces of hot stone that burned little holes in their clothes. Stone the crows, I thought. 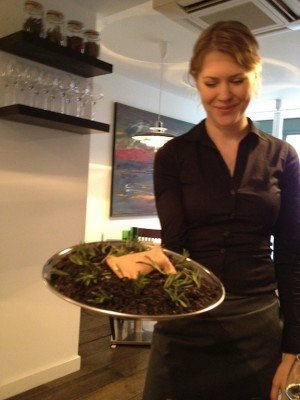 The unexpected highlight for me was a leek dish that used the King Richard variety. It turned out to be far from being the common or garden variety and much more befitting of its regal name. My categorizing of leeks is something I cook up with potatoes on a cold day to make a hearty soup. Roganic’s dish, however, completely reconstructed my conception of what a leek is. To start, the waitress came over to our table and showed us the dish that had just come out of the oven, explaining how it had been cooked. At first glance, it looked like a small, uncooked Cornish Pasty on a bed of peat covered in thyme. Then she pointed out that what we were looking at was a clay dish and we realized that the leek had been encased and cooked in its own mummy-like, clay pot. When next it arrived, de-cased and plated, it looked plump and golden, sitting on a spread of shallot jam. The waiter then shaved a Norfolk truffle ball on top of it, using great precision. My King Richard was finally ready to eat. My moment of pleasure turned into an explosion of intense flavours – I’ve never experienced a leek to be quite as beautiful. The Barcelona tapas experience came flooding back to me. I had to close my eyes and go ‘ahhhhhhhh’. 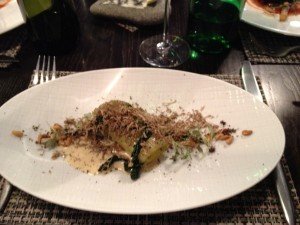 Each of the dishes brought their own surprise array of delights that we joyfully assayed; colours, textures, weightiness, crunchiness, and whatever words came out of our mouths. We tried their signature onion ash (that looked like something in between peppery flour and the gunpowder debris from indoor fireworks) along with foraged herbs, petals, wood sorrel, intensely, aniseedy shoots and various sprigs and seeds. 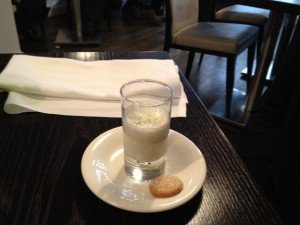 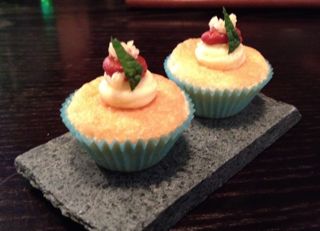 Finally, we enjoyed a warm afterglow that ended the meal – a small liquor glass of Douglas Fir-infused milkshake followed by a baby Victoria sponge cake which popped and crackled as we bit into its icing – like a delicate sparkler going off in the mouth. If only I could get a silver colour like Nadia gets her beige colour. Just imagine what that would be like.