Warning: Use of undefined constant core_mods - assumed 'core_mods' (this will throw an Error in a future version of PHP) in /nfs/c06/h02/mnt/186971/domains/interactiveingredients.com/html/wp-content/themes/interactive-ingredients/functions.php on line 14
 Sweet Spot - Interactive Ingredients 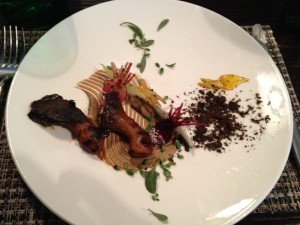 There is a new American quarterly magazine out called Lucky Peach that is about food and writing; the second issue features articles on the sweet spot of cooking. Such moments occur at a significant point in the trajectory of cooking – when something tastes just perfect, having been matured, dried, marinated, etc. Left any longer and the magical umami is ruined. Any less and it has not triumphed.

Underlying the metaphorical term is the idea that there is a limited window of opportunity to discover the optimal experience. For a chef to hit the sweet spot requires making a dish just so. Sweet spots can also have perfect moments. But you have to know how to recognize them. They can easily come and slip past unnoticed. A chef can overdo a dish by not turning the heat down at a key moment.

“You have to act at certain moments in certain ways. That is what cooking is.” (Donald Patterson, Lucky Peach)

Magic moments happen when the diner, reciprocally, experiences the chef’s perfect moment; often it comes unexpectedly and that is part of the magic. Suddenly, out of the blue, arrives a train of intense sensations. The trick for the diner is to savour them for as long as possible; lingering over them and replaying their unfolding delights before depositing them in a multi-sensory memory bank.

The other week I revisited Roganic; this time, with some fellow colleagues, S and D, from the Slade School of Art. They were as enchanted by the whole dining experience as P and N were as described in an earlier post.

D and I had the vegetarian menu. As we contemplated the sweet spot, our first dish arrived; “caramelized cauliflower, sour cream, raisin, roasted lettuce and pennywort.” It comprised smoked cauliflower florets, both white and brown, and a glistening gem lettuce heart sitting like an expensive jewel surrounded by a coating of cauliflower dust, gently flecking the rest of the plate. The composition was simply stunning; the palette of colour, shape, size and texture was perfectly spaced and balanced.

It looked too beautiful to eat – D commented on how it reminded him of a scene from Gulliver’s Travels that he had just been watching with his children. The separation of the tiny vegetables, herbs and thinly painted streaks of sauces made it look like a Lilliput landscape of trees, plants and streams.

We began by visually grazing all the different elements. But our mouths soon began watering, and we found ourselves involuntarily picking up our knives and forks in anticipation of the tastes. First, to be speared was a tiny white floret on the left of the plate. This was followed by the scooping up of an adjacent brown floret; our sweeping manoeuvres were delicately repeated, smearing each floret with alternating touches of brown raison jus and white sour cream. The symmetry was engineered and anticipated as part of the chef’s – Ben’s – perfect moment. We both just got it.

Once the florets had been devoured, we sliced into the emerald centre-piece. The texture of the lettuce and its fused tastes were divine.

Without discussing the implicit ordering behind our deft left-right-centre moves, D and I discovered that we had done exactly the same; it was as if the miniature forest before us suggested how we should approach and enter it in the way a painting does. And yet this was the first time we had seen this delicately poised dish.

It is well known that plating is central to gastronomy along with the selection of cutlery and tableware. One foodie blogger suggests that it should “completely obfuscate how the dish should be eaten. This serves to replace the diner’s initial hunger with feelings of uncertainty, inadequacy, and ultimately inferiority.” However, I think this blogger is missing the point – what is key is the playfulness behind the chef’s plating, especially how it triggers unexpectedness and joy in the gentle deconstruction of it. It is not about feeling like a lesser mortal but understanding its ephemerality – a core part of the pleasure is knowing how to appreciate it when it has gone.