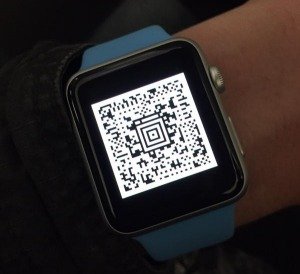 While travelling on the Heathrow Express into London I had one of those envy moments. As the ticket inspector came into the carriage I fumbled in my bag for my ticket that I had just bought at a ticket machine while a smartly dressed guy across the aisle from me raised his arm to her brandishing a sparkling new Apple watch. The QR code on his ticket filled the screen. The ticket inspector put her handheld scanning machine next to his arm and hey presto his ticket information pinged up on her screen. Ktchung! We all looked at her smiling face and marveled at how slick the action had been. It was her first time checking an Apple watch face.

She then turned to me and I handed her my ticket. She looked at it and then me and said, sharply, “that’s your receipt.” I apologized profusely and looked again in my bag for the ticket. I found another one and gave it to her. She looked back at me and said that was also a receipt. Two receipts, no ticket! I must have left the ticket in the machine in my dash to catch the train. I tried to explain how after two pieces of card had been printed I’d assumed that one must have been the ticket. Then I remembered, how on other occasions having to wait ages for numerous bits of card to be printed (some for the seat assignments) and each time scraping the back of my hand to scoop them up as they slowly came out of the machine.

Luckily she was sympathetic and did not make me buy another ticket. Meanwhile Mr smart guy’s watch had turned into a swirl of candy crush apple icons and he and his colleague returned to talk business. I saw the future. I checked out the new smartwatch train apps and saw that there is a cool one for checking where you are on the track and what the next station will be. Perhaps, that was a trainspotting step too far!

Yesterday, FitBit’s shares soared on the New York Stock Exchange on their first day of going public. The wearable technology company that sells fitness bands that track your sleep, calories and footsteps sold over 10 million of the devices last year. That is a lot of people wanting to find out more about how their body works. It seems all the tech companies are getting in on this wearable act, all counting and measuring parts of the body, from pulse to movement. One I tried, was Microsoft’s new Band – that was a gift given to me at a tutorial run by Microsoft. They normally cost £170 each. Made me feel like I had been given a big present. Once I had set it up, I was curious to see how well I had (or not) slept, how many calories I had burned each day and what my pulse was. There are lots of other cool sensors packed into the band; one that even lets you know the current UV level so that you know whether to slap on some sunscreen.

But after two weeks I stopped using it. I did not need to obsess about whether I was exceeding or deviating from my average number of counts. Checking occasionally an app on my mobile phone to see how often I have reached or exceeded the magical 10,000 steps each day seems to be about the limit of my interest in body counting. According to one of my colleagues a lot of other people also stop using their wearables after a couple of weeks, once the novelty has worn off. While the consumer market may not grow big it seems the corporate one is likely to. A number of companies have been buying them for their employees with the goal of improving overall employee health and well being. BP America, for example, bought 24,000 FitBits for its employees, their spouses and retirees in 2013. Nearly 75% of their employees are now wearing them. That is a lot of step counting for a company usually associated with putting your foot on the gas!

It is not just BP. Last year, according to an article written by Jena McGregor in the Washington Post about 7% of all Fitbit wearers got given a band by their employers. And that is likely to increase as more health insurance companies offer reductions in their deductables as part of their health insurance schemes to companies who get their employees to wear them. No wonder Fitbit shares are soaring. While I was free to stop using my fitness band, I wonder what the pressure to continue wearing them is for those who are given them at work. The social pressure to conform could be immense. If everyone else at work is wearing a Fitbit or a Band or an Apple Watch maybe it will be hard to justify why you are not. Especially when 3rd party companies are brought in to manage the scheme and so in charge of the privacy issues as to who gets access to your personal data. Luckily, we humans can be crafty. If you have not achieved your 10,000 steps each day there are workarounds – so long as you just know how to…