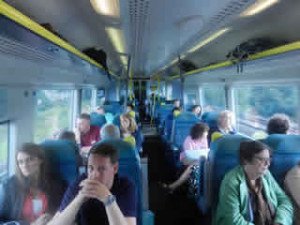 Last week my bag was stolen on the train as I was travelling home. As the enormity of what had happened dawned on me I jumped up and ran out of the carriage to the train door. But it was too late. The train had just started to pull out of the platform. I stood there helpless and my fellow passengers tried to help with offering to phone the transport police. All was in vain. I got off at the next station, Wivelsfield, and ran to the other side to catch a train back to the previous station, Hayward’s Heath, but just missed it. I was stranded at a tiny provincial station and had to wait another 30 minutes for the next one. There was no one in sight – no one I could explain what had happened to me. During that time as I replayed over and over again in my mind what had just happened. It was all in slow motion – paradoxically, as I paced up and down the platform. I was desolute. 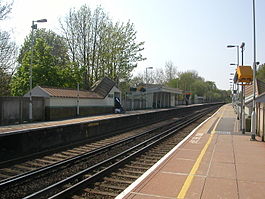 It is common for traumatic experiences to be remembered by people in slow motion. How and whether there is scientific evidence for it is open to debate. But the perception is real to those who have witnessed a crash, been in an accident or had something unpleasant happen to them. Time really feels like it is slowing down. My memory of the moment of realization was it feeling like ages from jumping up from my seat to getting to the door of the train.

The way in which the theft happened was very clever. Two dodgy looking guys distracted all of us sitting in the carriage with a seemingly innocent question – and during that moment they stood up, took my bag (which was next to my feet) from under our noses and disappeared. It was less than a minute later but it was too late. They had gone.

The next 24 hours were desperate times. I had nothing on me except my train ticket. My purse, house and work keys, laptop, phone, ID card, address book, glasses, etc., etc., were gone. When I eventually got home (my neighbours had a spare set of keys so I was able to get in) I started the process of stopping my cards and changing my passwords. Then the next day, I went to the Apple Store and begged them to sort things out for me (they are incredibly busy all the time). I was there for 4 hours and they were very helpful. I ended up with a brand new phone but being credit/debit cardless, had to go home to get other forms of ID that would allow the phone company I had a contract with to agree to give me an upgrade on my account. Backwards and forwards I went.

For the last few days, I have been changing all my passwords and updating all my digital records. There are so many things that we have connected to our cards. For example, the automated top-up feature on my Oyster card failed because my debit card, it uses, had been stopped. My new credit/debit cards, which arrived today, wont work until the new PINs arrive. Deliberately sent a few days later to prevent fraud. I’ve been living on cash (my bank was able to let me get some out using an old cheque book and my passport for ID) for the last few days and it makes you realize how much we depend on plastic for our everyday transactions. The list goes on, from having to set up again other direct debits and credit card details for utility bills, Amazon, British Airways, etc. Exhausting and very time-consuming sorting everything out.

But every cloud has a silver lining. I was able to upgrade on my O2 contract to enable me to get a brand new iPhone 5s without too much extra cost. A slate silver one. It is a very beautiful object. I’ve been exploring all the new functions and enjoying trying them out – in between the relentless pursuit of re-establishing my digital identity. One function that is cute is the slow-mo video that is included as part of the package, that slows down the video to a fourth of its speed. This is my first attempt – one of my new PhD students (Jessi Baker) jumping up and down in my office.

There are many more of them appearing on the Internet. Here is another one I really liked. I look forward to more hours of fun ahead instead of more grief.

Finally, I am reminded of Mark Wallinger’s ethereal ‘Threshold to the Kingdom’ (2000) – a masterpiece of slow-motion, which I have spent much time absorbed in. Best experienced through life-sized projection with loud stereo, but here is a clip of it as a taster: