Warning: Use of undefined constant core_mods - assumed 'core_mods' (this will throw an Error in a future version of PHP) in /nfs/c06/h02/mnt/186971/domains/interactiveingredients.com/html/wp-content/themes/interactive-ingredients/functions.php on line 14
 Sizzle Service - Interactive Ingredients 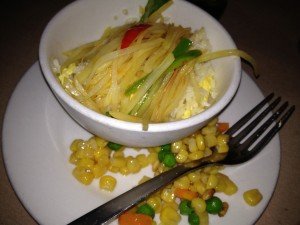 A group of about 12 of us traipsed down to the basement of a restaurant in Chinatown on a rainy and windswept evening in Manchester. It was the tail end of our second day at an intensive workshop, where we had been hard at work landscaping the future of human-computer interaction research. We were exhausted and hungry. Two round tables had been pushed together in a corner, under a cove, hidden away from the rest of the restaurant. We shuffled in and sat down in anticipation. Big, heavy, black-coated menus were handed out to each of us. We began flipping through the vast encyclopedia of dishes, embedded in sticky plastic pages.

My neighbour to the left, M, and myself took the easy option, selecting the vegetarian set meal – not wanting to navigate and choose. The rest went for the full chinese, selecting an assortment of platters.

To our surprise, the veggie soup arrived first. Two bowls of murky brown liquid, with various mushroomy things floating in them, were placed in front of us. We looked at each other, took a sniff of the rising steam, and instantly had the same gut-reaction. The smell was acrid and sewer-like. I’ve never been keen on the British variety of Chinese food – liberal lashings of MSG do not agree with me. But this kind of whiff was new to us, signaling a no-no; we both moved our bowls to the centre of the table, untouched, and switched back to our bottled beers.

I then went in search of the toilets, and found them at the top of a rickety staircase, which was hidden behind a thick curtain. Stacked up outside the ladies were boxes and sacks of onions, carrots, greens and other supplies. They had to be awkwardly navigated around. Once inside, it was cold and shabby; a notice on one cubicle door saying ‘out of order’.

The evening was not boding well.

It is times like this when one needs to dig deep to raise the spirits – or take one’s leave – which was not an option. I gulped slowly on the cold air and descended again.

A large tureen of chicken soup had arrived that was being efficiently ladled into two semi-circles of bowls, next to where my seat was. This classic dish was appreciated much more by our fellow diners than the pungent vegetable soup. Soon after, the ubiquitous duck arrived with plates of flat pancakes, diced spring onion, cucumber and various red and brown sauces. No veggie equivalent was brought and so our companions invited us instead to make duckless rolls. We declined.

Meanwhile, the waitress had stood right next to me, chopping and dicing the meat off the duck’s back, inches from my face. I took out my iPhone and filmed the last moments of the spectacle. I am always amazed at how rapidly a whole solid form can transform into a plate of shreds. But to be so close was something else.

Our party, now filled with chicken gloop, relaxed and raised their voices. M and I looked at each other and sipped our beers again. What were we to do? We took the duck scene as our cue to be mischievous. I can resort to being quite cheeky if it is just me out of my comfort zone – and when not able to escape – but with two of us in the same state and up for it – well, it can get out of control.

A lively member of our party, H, on the opposite side of the table had been telling her neighbour about her hen night. We listened in. She started to tell us about how Tim the butler, had suddenly appeared at her house, with a well-chiseled and buffed six-pack, standing to attention, almost naked. He spent the evening with her and her friends, playfully serving them cocktails and nibbles from the fridge.

This picture of fantasy service was in such contrast to the prosaic, slap-on-the-table style we were witnessing. M and I began playing a game of ping-pong, batting quips and one-liners across to H and each other about the contrasting scenes. We stretched the butler story far for all to share, embellishing and exaggerating in detail the more surreal aspects. Our banter became contagious and before long we had the whole table in fits of laughter.

Plates of more dodgy-looking, lurid-coloured and MSG lacquered food arrived, but it ceased to matter. M and I picked at it and puckered our faces; by this stage the evolving narrative had become our food. Our chopsticks became drumsticks and we drum rolled each new part that was added to the story or repeated in more detail.

The climax came when the waitress slapped down a signature dish of fizzing, shiny meat. “Sizzle, sizzle.”

There is only so much high-octane, chopstick banter that can be juggled before it falls pancake flat. After the sizzle moment, we grabbed the keynote speaker, who was falling asleep from Korean jetlag, and took her back to the hotel – but not without encountering a murky tapioca lake of hailstones and sleet that had descended on the streets whilst we were in the bowels of Mancunian Chinatown.

And check out Butlers in the Buff.