The Cape of Hope is a ‘beauty spot’ at the southwestern tip of Africa, famous for its dramatic scenery and steeped history. Its magic has captivated travellers for centuries; rugged rocks, sheer cliffs, white beaches, indigenous flora and fauna, stark lighthouses, galloping buck, cheeky baboons and fleeting zebras. When I visited last Sunday, coachloads and buses of excited tourists from all over the world were spewing forth out of their capsules, snaking their way along one of the ‘southern’ most points of Africa. Many were scantily clad and some even covered in garish bling that made us stare and snigger. The contrast been man and nature was stark.

I went with a local artist, H and her 11 year-old granddaughter, Tye who lives nearby. T had an amazing sense of the place, walking the whole time with bare feet, despite the harsh gravel, sharp dust and prickly plants along the paths. As we joined the crowds pounding the well trodden steps slowly rising upwards towards the pinnacle of a lighthouse, a few of our fellow sightseers looked at her feet and started pointing and talking in loud foreign voices. She smiled and leaped passed them like a mountain goat.

Not only did she have gecko-like soles, but radar-scanning eyes, spotting camouflaged creatures before me and her ommi had chance to saccade from the last amazing sighting; fat black lizards sunbathing on the rocks, a bald-headed eagle drifting by, a slinky family of mongese scuttling passed, some dassies hiding in the rocks (that look like a cross between a rabbit and a rat), and towards the end of the afternoon a big black male ostrich popping its long neck up from its skirt of black feathers from beneath the bushes and even a kelp-like shark in the distant sea. It was an unexpected feast for our eyes, as we followed her flitting movements and chirpy commentary. But her proudest moment was pointing out a very big puff adder lying right next to us, basking slothfully in the sun. We gasped in shock and then fumbled with cameras. 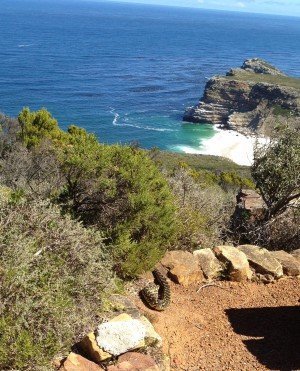 There were a few false alarms, too. A rock that looked like a tortoise and a stick that looked like another snake. We then had a very late lunch at the Two Oceans restaurant, near the point where the Atlantic and the Indian oceans join. We were joined by scavenging birds who showed no fear, as they tackled very crisp chips, by slapping them down on the table to break them into beak-sized chunks. One cheeky one even had the audacity to peck at the dried on ketchup on the side of the bottle to mix with his mini chips.

We then walked to a beautiful bay where very few tourists were and saw a rock formation that looked like an Egyptian dog head. T meanwhile had been darting dangerously near the edge of the cliffs, jumping over ropes and cascading off the boardwalk as if she was surfing on her gecko pads while at the same time talking in a hyper-manic way, regaling intricate and intimate stories of her antics back home, school and somewhere between. Later we realized it was the Coca Cola talking the walk. I was reminded of my hiking trip last weekend, when some of my fellow walker’s enchanted us with their epic tales which widened my pupils as I imagined what it must have felt like to be there; cobras hissing next to their sleeping bags, hyenas licking the outside of their tents; lions lying at the end of their marital bed, and baboons nonchalantly peeling bananas taken from the fruit bowl having gotten in through the kitchen window. These guys sure know how to tell a yarn – the kind we never get back in the UK. 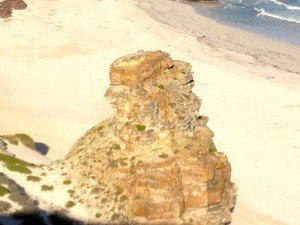 Compared to the safaris where groups are caged in 4x4s, binocularing and then checklisting the big five African mammals, in anticipation, we just kept stumbling across the unexpected by noticing something strange. My big African moment was looking at some big brown rocks that suddenly started moving – turned out they were muscles and horns…it was a big herd of eland munching their way through the Fynbos. A rare, out of the blue, sighting. I, at last, understood what it meant to see more and to be like T.