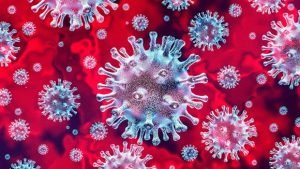 It has been a full-on week of remote working since the university instructed us last week to do so because of the escalation of coronavirus. It feels like I have had more videoconferencing meetings than hot dinners! One moment it is Skype, the next Teams and then Zoom – many have been back-to-back. Even though it is great that we can keep in touch in this virtual way, it is frankly exhausting – but in a different way from my usual tiring day at work. While my twice daily train commute often takes its toll at the end of the day, sat being glued to a screen for hours on end, talking to virtual colleagues and students, elevates fatigue to a new dimension. It is not a physical exhaustion but more enervating, like how one can feel after a long Sunday, when you have indulged in too much binge-watching.

Part of the new tiredness also stems from having quite different kinds of meetings than usual; having to deal with so many updates and breaking news each day, on what has been planned, decided, revealed and mandated by government, country, university or at the departmental level. Right now, there is an awful lot of ‘cascading’ interspersed with checking up and reassuring each other. There seems to be much less ‘actual’ work’; but one hopes this will return once routines begin to settle into place.

Then out of the blue you might get an email from one of your colleagues letting you know they are not feeling well and have begun self-isolating. It is quite anxiety-inducing, worrying if they have got the lurgy. I have heard now from quite a few people that they have developed flu-like symptoms and are self isolating; some seem more serious than others. It is all a bit discombobulating, and russian roulette-like. You can but hope they will be better the next day.

To welcome each day, I have started walking on the beach early in the morning with a couple of my neighbours. It is invigorating, filling the lungs with fresh sea air and watching life at a distance. We even see a group of women each day, braving the waves in their wetsuits for a bracing swim. But who knows how long we can carry on doing this before a lockdown is imposed – as has been the case in Spain and Italy.

Today it was raining and so we put our umbrellas up; making it easier for us to ‘social distance’. At one point we entered a shop, and while waiting in line, other customers came in and stood a metre apart from us and each other – abiding by the government’s guidance. It felt a little strange and silly as we skirted around the small place. But even though it seemed unnatural it felt prudent.

Later in the morning, when I peered out of my study window that looks onto a primary school playground, I saw many 5-6 years old children playing together during their break time as if they did not have a care in the world (as it happens it was probably for the last time as UK schools begin to close). For them the concept of social distancing must seem alien. As for taking part in social isolation, it must seem even stranger, as to why they can’t go out to play but instead have to stay indoors for a week or two without physical contact with their grandparents or playmates. 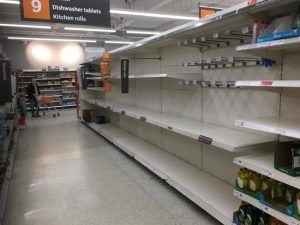 This new world order brings out the best and worst in people. There are so many acts of kindness being reported it makes you feel warm and fuzzy, realizing that, as human beings, we like to look out for each other. However, the flipside is just how many people are looking out for themselves. Many can’t resist the temptation to stock up on tins, bread, toilet paper and other staples. Panic buying maybe, but it gives them something to do and makes them feel safe. I found myself today, after failing to find any cereal left on the shelves, wondering if I should buy the last remaining cereal bar that I spotted. I would never normally buy such a thing let alone eat one. It is not easy to restrain oneself when irrational fears enter our psyche. As it turned out, one of my neighbours came to the rescue and brought round a tasty loaf of bread.

As we have all started to sign off our emails with: ‘Stay safe’.