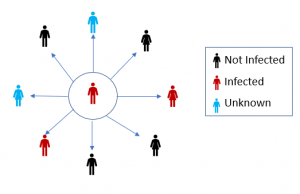 It is great to see the tech companies coming together to do their bit to help curb coronavirus. Apple and Google have been collaborating on a tracking platform that could help governments worldwide monitor, track and manage the pandemic more effectively. Their proposed system works by using Bluetooth and encryption keys, that enable data to be collected from phones that have been in close proximity with each other. From this data, it can be inferred who else, phone owners have been close to, for a set period of time (e.g. the quarantine period of 14 days). Users can also alert health authorities if they have been diagnosed with Covid-19 and conversely, the system can text them if they have detected that their phone, and indirectly themselves, have been in close contact with someone who has been diagnosed with the virus. The term coined for this new form of remote tracking is ‘contact tracing’ as illustrated by Apple and Google’s graphic: 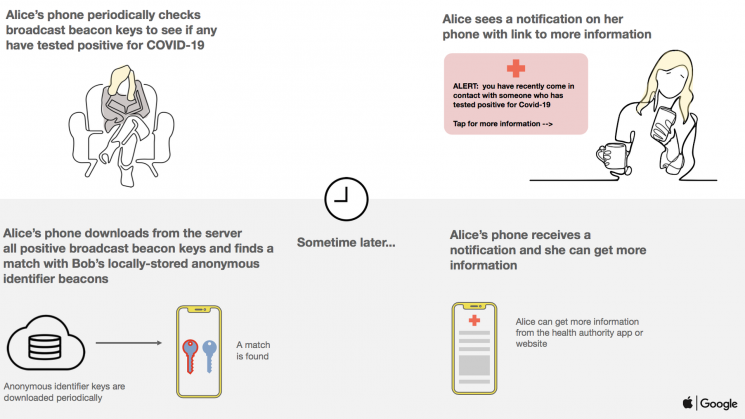 If everyone opted-in to the system and carried their phone around with them all the time, it could prove to be a much more efficient way of letting people know to self-isolate before they unwittingly spread the virus to others. Epidemiologists would also be able to analyse masses more data and be able to develop more accurate predictions. Governments could be better informed about the efficacy of introducing different policies and restrictions about human movement. It seems a win-win.

However, it requires everyone buying into the philosophy and the practice;  accepting them as the best way to stop global spreading of the virus. There may be some resistance when it comes to privacy concerns. But such worries need to be weighed up against the potential gains of having a pervasive tracking system in place whose sole objective is for the greater public good. One way is to reassure the public.

Much thought has gone into how to avoid unnecessary data collection; Google and Apple’s proposed method of contact tracing is limited in what it tracks and how the data it collects is stored. Compared with GPS that tracks people’s physical location, their proposed use of Bluetooth technology is to only pick up signals of mobile phones that are nearby, sampled every 5 minutes. Hence, the data collected won’t know that you were on a bus or in the supermarket at a certain time. It will only know you were close to a person who has just been diagnosed with COVID-19. This is an important point to be really clear about – as to how much of what someone is doing is  actually being tracked. It also helps if the data being collected is encrypted to address privacy concerns.

To enable such a tracking system to have widespread uptake, governments can either be authoritarian and imposing (as is the case in several countries in Asia) or democratic and encouraging – through educating, persuading, incentivising and nudging people – to opt-in. However, this takes time; during which dissenting voices in the press and social media together with conspiracy theories may take hold and increase a groundswell of worry.

To overcome scaremongering and anxiety, requires open debate about what is acceptable and what is not, and how this can change over time and in different cultures and circumstances. Consider CCTV: it is now widely accepted in many countries as a technological deterrent against crime and yet when it first became mainstream in some countries like the UK, many people were up in arms, not least the Snoopers Charter. Since, however, public opinion has changed. Police authorities found the cameras to be very useful in helping in their investigations and through acting as a deterrent. Nowadays, cameras of every shape and size have become the order of the day, from webcams worn by front line workers to massive multiplex CCTV security set-ups in shopping malls.

Part of my research agenda is to investigate public opinion and sentiment about ‘creepy data’. We carry out studies to see which technologies people find acceptable and which makes them uncomfortable, compromised or feel threatened. In the early days of mobile phones, I worked on a project called Primma which was concerned with investigating how to enable people to manage the privacy of their own mobile devices within a framework of acceptable policies. One of our user studies, called Contravision, explored public reactions to a fictitious future technology called DietMon. The proposed tech enabled people, who seriously need to lose weight, to be able to track their calorie consumption by providing them with information on their phones about the amount of calories in the food that they were contemplating eating. A chip was also embedded in their arm that sent data about their physiological states to their GP. Participants were shown either negative or positive videos of how people managed their everyday lifes when using such monitoring tech. Their reactions were mixed; some people were grossed out, others saw the potential benefits of the system. Importantly, it resulted in an open debate where a diversity of different perspectives were explored – in sharp contrast with the scaremongering that the media often present to the public.

Another project we were involved in which addressed privacy concerns was what people would think if everytime they went to a public toilet their urine was analysed.  The method used was also based on a fictitious scenario but more daring in its method. It was called the Quantified Toilets: Signs were put up in all the public toilets in a convention centre informing the public that this type of tracking had been introduced as part of a healthy building initiative.

The anonymous data collected from each cubicle was posted on a public website  for all to see: it showed the amount that had been deposited, whether it smelt, whether someone was pregnant, had an infection, had been drinking or taking drugs (see below). The aim was to observe people’s reactions when coming across the sign and website; would they take them for real, and if so would they be upset, surprised, outraged or not mind? 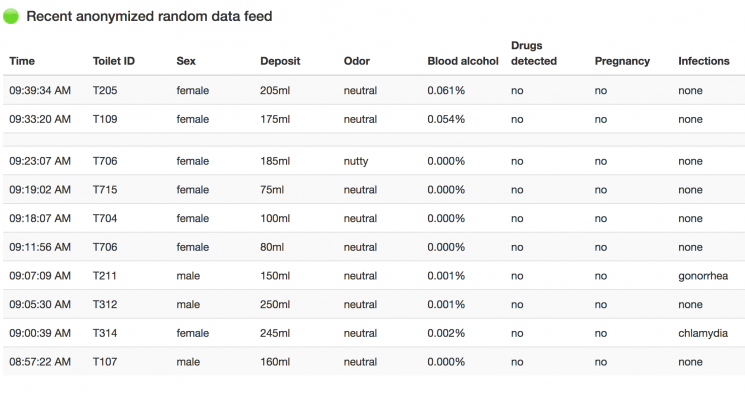 What happened was surprising. The project went viral in hours; some people got duped and blogged and tweeted about it in an outraged way.  But others were more positive. In the end, many different opinions and concerns were voiced. One comment that was made resonates with the current contact tracing dilemma: “Privacy is important. But I would like to know if I was sick and this is a good way to do it.”