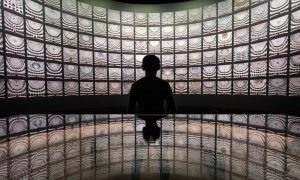 The other day, I went to the Victoria and Albert Museum’s new exhibition “Opera: Passion, Power and Politics”. This latest extravaganza explores the context, history and origins of seven great operas in seven magnificent cities, from Venice to Leningrad, where they were originally performed and for which they are now renowned for their operatic heritage. It has been curated as a journey through opera, full of suspense, the visitor never quite knowing what to expect next.

Quality headphones on, my friend and I were initially led into a passage where a beautiful aria burst forth into our ears. My friend started grinning from ear-to-ear and went straight into ‘the zone’. After our visit, she told me how the first few lines of the aria had triggered a Proustian moment, taking her right back to a poignant time in her life when she had first heard it. I looked on enviously while being distracted by trying to get my headphones to sit more comfortably on my head. It proved more difficult, however, for me to be transported. So I left my friend in her element and wandered into the next darkened room, where I was taken back to 17th Century Venice, which is where it all began. There were various exhibits in the room intended to give you a taster of the passion, the politics and the power – that had been crafted and selected to convey iconic aspects, including original music scores, costumes, and old instruments.

For me, the multimedia experience was largely about the music playing in my ears rather than the visuals confronting my eyes. I tried to focus on the artefacts in front of me and read accompanying materials but it proved quite difficult. The sounds in my ears had my undivided attention for most of the time. Sometimes, I managed to synch what I was looking at with what I was hearing.  Other times, I simply closed my eyes, wandered around and listened. I barely noticed the other people milling around the space or how crowded it was. They appeared almost like solo ghosts coming in and out of focus. No-one spoke, just the occasional smile of recognition or a whisper, with a partner/companion. The one time I did hear an old couple talking to each other rather loudly, it appeared very discordant and, immediately, another woman walked over to them and shushed them.

The exhibition set-up uses wireless location-based tech to track where you are so that the head-hand set can play the relevant operas and sounds that go with the rooms as you enter and walk around them. No need to ever tap a number into the handheld device to match up with the exhibit in front of you. The effect is to place you in your own digital musical bubble – quite a contrast to how multimedia guides are used in art galleries and other museums. The transitions from one opera to another are abrupt but the moving is fluid. You don’t have to suspend your disbelief of going back in time to work out what buttons to press. 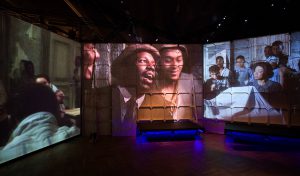 In the middle of the series of themed rooms and joining passages is a large cavernous space where short clips from films of more recent operas  were projected onto multiple sets as if appearing on the backstage of an opera house.  Very cleverly done. It was mesmerizing to watch and listen to one after the other – enjoying the climax moments as they multiplied across them. This was where the combination of sound and sights really worked for me in unison.

The whole experience was one of sheer delight. I could not agree more with an excerpt from last week’s Evening Standard’s review:

“Throughout, you’re hearing sounds so beautiful that it’s a wrench to leave one historic moment and enter another. You want to stick with what you’re hearing. What drives you on is curiosity to see what the clever organizers have come up with next.” 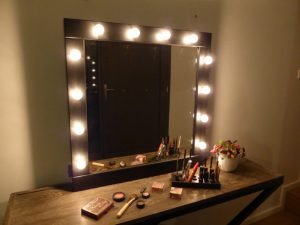 However, you are always very much an onlooker – in reverence and in awe. Opera does not have to always be so. Last year, one of my students and I worked on a collaborative project with the English National Opera and a tech company, called Holition, where we developed and evaluated an app that was intended to enable the general public to literally ‘step into character’ and in doing so, imagine what it was like to be an opera singer. It was called the MagicMirror and we dressed it up to appear as a make-up mirror in a real dressing room at the London Coliseum Opera House. It was incredibly effective. Pity, there was not some more of this kind of interactivity at the V&A. But then again it is a museum and not an opera house.