Warning: Use of undefined constant core_mods - assumed 'core_mods' (this will throw an Error in a future version of PHP) in /nfs/c06/h02/mnt/186971/domains/interactiveingredients.com/html/wp-content/themes/interactive-ingredients/functions.php on line 14
 Olympic Mordancy - Interactive Ingredients

The big countdown has begun. The media is beating its drum for the London 2012 Olympic Games to finally begin. Everywhere you look you see the Olympic logo. It should be a fantastic festival, a great time for everyone to share magical moments, with Usain Bolt breathtakingly running like lightning. But nearly everyone I know who lives in or commutes to London is planning to escape from the metropolis or stay indoors for the 3 week duration. It has become a sentence to be avoided at all costs. In contrast, a massive influx of visitors from all over the world will descend and decamp in London, filling the hotels to the rafters, and paying extortionate prices, seemingly not worried about crowds, congestion or commotion. How is it possible that a vibrant city can empty and alienate itself so spectacularly of its own citizens?

Reams of angry words, laced with caustic humour, have been written about the Games by indignant bloggers, journalists and tweeters. Simon Jenkins scathingly sums up the overblown-ness:

“What the Victorians reinvented as a herbivore festival of amateur athletics has become a parody of Hitler’s chauvinist hysteria. It starts with flags and anthems, moves on to medal tables and “heroes”, and ends as the most important thing on Earth.”

The irony is that while everyone outside of London is getting excited, those living in London and the outskirts are not. Long gone are the days when the locals could show up on the day and buy a ticket to see a track event. Tickets had to be bought a year in advance, from a website that was incredibly complicated, followed by an enormous long tail email trail (informing you of every merchandise, mode of transport, etc under the sun, bar actually sending you the tickets). There were very few of the millions from London who could be bothered to wade through the lottery website maze.

One of my favourite pieces written by Andrew Gilligan in the Spectator this week (14th July) was called ‘a matter of taste.’ Instead of having a go at the inconvenience or the price of everything, he chose to focus on the ‘naffness’ of it all, “being run by people with no taste, no imagination, and no idea how to have fun.” He notes, too, how everything is either grey or in bad taste: the buildings, the logo font, the mascot, the souvenirs, the advertising, the signs, and the volunteer uniforms. I know exactly what he means as I look around me when I make my way through London. Whereas Disneyland is cute, colourful and magically choreographed, the Olympic package is “a face of regimentation, ugliness, and mediocrity.” 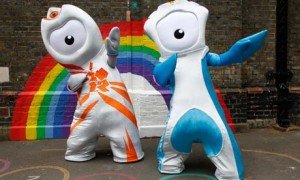 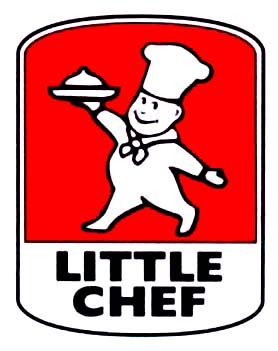 I am reminded of the challenge Heston Blumental set himself to change the face of the Little Chef eateries that adorned desolute parts of our A road arteries up and down the country (sadly many have gone into administration). The cartoon logo of the Little Chef was instantly recognizable by all, as was the comfort artery-clogging food they served to the piles of families that tumbled into them from their family estate cars. Heston made a Channel 4 documentary entitled Big Chef takes on Little Chef about his mission. It was absorbing TV viewing; watching Mr and Mrs Huddersfield try braised ox cheeks for the first time. Ironically, his revised menu included the all new Olympic Breakfast, where the dodgy old ingredients were replaced with fresh, good quality ones: “outdoor-bred British pork sausages,  two rashers of Wiltshire-cured back bacon, two griddled free-range eggs, a slice of Ramsay of Carluke black pudding, a roasted field mushroom served with either Heinz baked beans or a chargrilled tomato. And a slice of toasted bloomer bread and butter.”

If only Heston had been commissioned to help organize the citizen’s experience for the forthcoming Olympics, people in the city might have really looked forward to them, instead of being utterly cynical about corporate Britain dressing London in sponsor-correct ribbons, banners and logos. I am sure he would have come up with much better ways to simply and purely enable us all to admire the human body in all its elegance and glory – which is what the Olympics should be about.