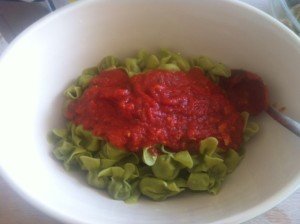 Is it possible to give up meat when you are a serious carnivore? I bet a couple of Danish guys I know – who eat serious amounts of meat usually at every meal – that they could not go a month without it. I was surprised when they took up the challenge. There was much joshing and ribbing in the build up to the start. But on the first day of their new veggie diet, in mid-June, they went about it with much gusto and seriousness.

Throughout their meatless month, they ended up cooking many different dishes of vegetables, cheese, falafel, patties, pastas and more. They went through feeling very hungry, eating healthily, then sometimes eating badly (lots of pizzas, beer and cheese) and having to suffer, by having to cook meat for the rest of their family whilst not eating any of it themselves. It was very difficult at first – but the anticipation of the enormous meat feast at the end kept them going. And what is more, they now eat less meat in their day-to-day diet.

At first they both felt really hungry all the time, but then after a week they began to feel normal and even lost weight. A highlight was keeping in touch on a daily basis through sharing their experiences via email updates. Everyday they took photos and sent them as attachments to me with a description of what they had eaten, with witty asides. I’d really look forward to seeing what they had concocted, and, on the occasional day when they didn’t, would start to get worried. But my fears were unfounded. My emails sent to them showing concern made us bond more and their replies would be even wittier.

By the end of the month I had a collection of 60 dishes they had cooked and/or eaten. Involving the family, sending photos each day and chivvying each other along helped enormously and in its own way was a creative way to change a deeply ingrained and habituated behavior.

Below is an abbreviated version of our shared diary.

Day 1
J: – spinach and ricotta pasta with tomato and chili sauce
So far so good
M: I seriously dont know what to say
BUT Day 1 in the Veg World 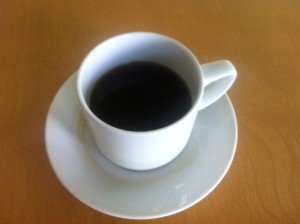 AND there was bacon and sausages on the buffet too, but I proudly did not have any. 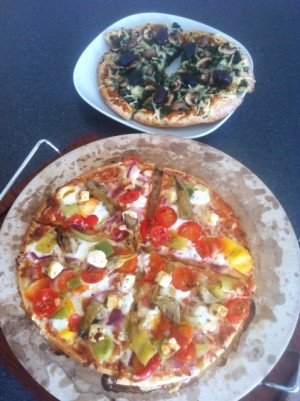 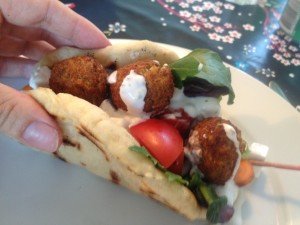 Day 3
On day 3, M got his daughter and friend involved and they helped cook a 3 course meal:
“My daughter A and her friend made dinner today – 3 courses. Hashbrown with salad as a main and chocolate cake for dessert. Really nice.”

I did not hear anything on day 4 from either of them and got worried, so asked if they had cracked. They replied:

J: “No, not cracked at all..! Made my best effort so far. Mushroom and asparagus risotto – using vegetable stock. Cooked over a few hours in good company of a bottle of Rose. One of our most delicious meals in a long time. I think you would both have liked it.”
M: “No no.. Pasta dish with onion and cream. A little boring. Btw: Yvonne, what should we eat for protein?”

Sunday is usually a day for a roast with a big piece of meat or fish. The guys had to endure a Sunday without:

J: “Leftover Sunday But with a fried egg. The white blob on the left is a slice of goats cheese pretending to be steak ” 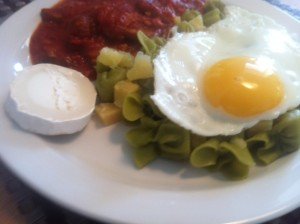 M: “Pasta with spicy beans. The rest of the family had salmon – not easy!” 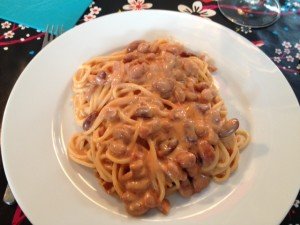 After the first week I asked them how they felt about having given up meat for a week. Both said they were getting better at it but still felt hungry.

This day was really tough for M because he had to visit somewhere that did not cater for non-meat eaters. That can be really hard – especially for the first time:

“We visited C’s daycare center yesterday where we had dinner. I had salad, carrots and rice. Seriously, vegetarians were not catered for. So I had what we call koldskål when I came home (advanced buttermilk).”

After two weeks I sent an email to them celebrating the occasion:

J: That is “two weeks left” I am thinking…
Me: are you dreaming of aubergines or bacon sandwiches?
J: Just bacon – no bread involved in my dreams.

Then came a night without an email from either of them and I got worried again, so sent an email to this effect:

J: “No worries. we had a long working day and ended up at the pizza place where I had a Quatro-Formagio 4x cheese one, again…” 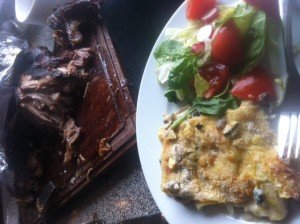 It was M’s birthday during the month – usually a time for a big feast. He got up at 2.00a.m to pull the pork and slow cook it. Then during the birthday meal, itself:

J: Here is what we had today..
While we had the vegetarian lasagne with salad, on the plate, the other guests had the pulled pork roast sandwiches.. Very hard to stand the temptation! But we did!!”

“One week left. Look forward to a less restrictive diet, but feel a bit overwhelmed by the thought of mountains of meat, which I dreamt of just two weeks ago…”

Whereas for M, he was finding it all a tad tough:

“Still no meat. But dinners are getting more and more boring.

Nearing the end of the month, fear crept in for J:
“First day with meat will be Friday – at the group’s BBQ at P’s place. I am a bit scared actually… Might have to start out a bit slow. Seem to have adjusted to no meat by now. The first week I was soo hungry, but that is not really the case anymore. In fact I seem to fill up a lot easier than ever before. I also had strong meat craving for the first 2 1/2 weeks, but not so much anymore. A bit confronting when I think about a huge steak actually… what have you done to me!!”

Was a big surprise.

J: I think this photo speaks for itself.. 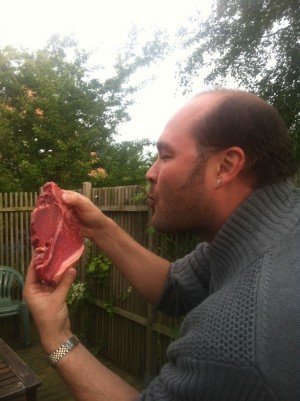 First taste of meat after a month. Went to the research group’s BBQ last night, and brought with me the biggest T-bone steak I could find. I must admit that I felt a bit worried that I wouldn’t be able to eat it all…

But it was delicious..! Absolutely fantastic, I have to admit. But then again it was a really nice piece of meat. The other meat-things I tried after that (meet balls etc, sausages, etc.) did not give me the same experience of satisfaction. So a month without meat certainly has done something to my perception of meat.
Felt very full afterwards though, and have had a bit of a tight stomach since.. I think I will ease it in over the next couple of days.
But nice feeling to be “allowed” meat again :-)”

M: “In the beginning I was hungry all the time, but was also enthusiastic about the whole thing. I actually searched for interesting and new recipes – which was partially successful. But it was difficult to change as my family still wanted to eat meat. Also, to make more sustained behavior change I think I would have to go into lentils and beans – which I didn’t. So the problem is that I ate unhealthy – chips, cheeses, bread with butter – just to avoid being hungry all the time. But I didn’t have stomachaches like I sometimes have – probably due to the lack of red meat. So I have cut down on red meat – which is probably good for me.”

On my travels, I’ve come across some of the most delicious braais and BBQs. I also discovered pub meat raffles (offering huge tray loads of raw meat). The idea of winning a pile of pork that would otherwise cost 40-50 dollars makes many salivate. However, the prize goes to Fiji, which I am currently visiting. It used to be called the ‘Cannibal Isles’ – a country that up until two hundred years ago still enjoyed eating the flesh (cooked or raw) of its (human) enemies. We’re off to see the caves tomorrow where there is an old cannibal oven still intact…