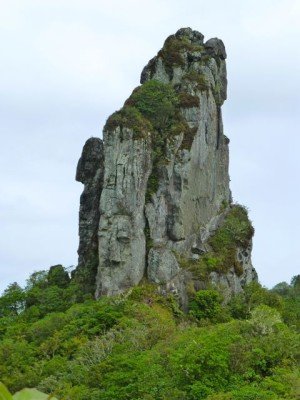 The idea of trekking across a tropical island from coast to coast is tantalizing. Especially when it involves traversing a rugged rainforest and hiking up and down a steep mountain in the middle with a magnificent rock on the top with spectacular views of the different sides of the island. This is what the Pacific island of Rarotonga’s cross island trail has to offer. Who could resist the challenge?

We should have had a premonition that it was going to be more than a sightseeing jaunt when we saw, the day before, a bedraggled family flag down the bus we were travelling on at the southern end of the coast path. The mother, covered in mud, was helping her bandaged young son hobble onto the bus, muttering, “that was rather an unsuccessful walk.” But, afflicted with hubris, one thinks that it won’t happen to you. Ha ha.

The walk starts gently for the first couple of kilometers with gob-smacking, larger-than-life ferns, banana trees, palms and other tropical vegetation. You feel dwarfed and can’t help but be in awe. All of a sudden the path gets very steep, with a strenuous ascent through a multitude of knotted arthritic tree roots. It feels like climbing endless, uneven steeple steps. You have to select your next step very carefully to ensure a good footing. Very concentrated, looking-downward, walking.

So we puffed our way up to the rock, known as the Needle, head down most of the time. Finally, we looked up again as we came out of the bush to take in the breath-taking 360 degrees views of the island, its coral reef and surrounding pacific sea. Many people attempt to climb the Needle but my vertigo and creaky knees put a stop to that. I already had a sufficient sense of achievement and did not have the urge to climb any further.

A short stop and then time to continue. The descent is usually easier and faster, accompanied by a mountain goat leaping down approach. How wrong I was. Like the ascent, the path was covered in an unpredictable combination of slippery mud, roots and rocks. However, whereas one can haul oneself up by clutching part of the crochet of roots, it is much trickier jumping down using the same technique. In many places there was no path – just a vertical mudslide drop. They call it a severe scramble in the guidebooks. We had to clamber down by grabbing hold of whatever was at hand above and below to anchor ourselves; shrubbery, old bits of rope, stumps, roots and hanging tree branches, some less firmly attached than others. But the force is propelled downwards and so it is more a matter of monkey-hanging rather than leveraging up. At other times, we had to cross a gushing stream, wading up to our knees, traipsing across mossy immersed boulders. 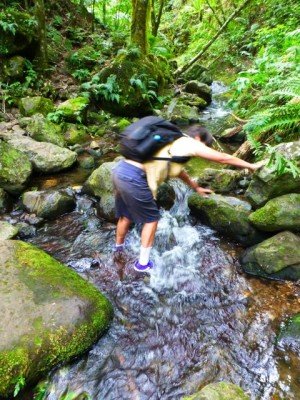 It was quite terrifying, especially when looking over the edge of the path that dropped very steeply into a thicket of the unknown. One slip too many and it could have been tropical curtains…I also had only Adidas plimsolls on which gave very little purchase. Unsurprisingly, I slipped a few times, once rolling head over foot near the edge and landing in an ungainly heap. Towards the end, I was covered in mud and my feet drenched and shriveled from all the wading through the stream.

All of this amounts to a big adventure that boot camp and other outdoor activities organizers would salivate over. Others have blogged about their amazing experiences but for me it was an ordeal. Confronting potential danger certainly gets the adrenalin going but when it gets treacherous it turns into fear.

At the end of the path is a big waterfall and accompanying deep pool. The locals simply drive to it up a tarmac road, get out and waddle over to look at it, play music and maybe dive off the rocks. The contrast between my relief at getting to the end of our momentous trek and the ease with which the locals entertained themselves was palpable. 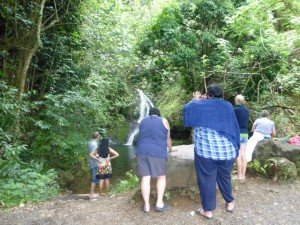