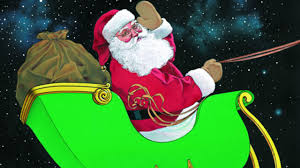 At what age do children stop believing in Father Christmas? I think I was about five when I saw my mother stealthily entering my bedroom with a stocking stuffed with presents ‘from Santa’ and placing it at the end of my bed. I pretended I had not seen her and waited a few minutes lying motionless before taking a peak at the goodies. I carried on pretending I believed in Father Christmas for another year.

Many kids seem to continue really believing in Father Christmas until they are 7 or 8 years old – according to some online surveys. That is hard to believe but maybe they want their parents to think they still believe in him. All part of the make believe that is part of the story of Christmas. The idea that a kindly old man with a big white beard comes all the way from Greenland, on a sleigh pulled by reindeers through the sky, and pops down every child’s chimney throughout the world, to deliver them presents is a wonderful fantasy. What young child wouldn’t want to stop believing in that?

But what happens when we become grown-up? Are we able to know when something is for real and something is made up? And do we pretend to believe in something when clearly it is not true? It seems the line is becoming more blurred. Some people have started making up stories, and publishing them online, in the hope that other people will believe them – even though they are clearly not true. These stories, however, are not innocent stories about kind people, but sinister stories about the world. Welcome to the year of fake news.

By fake news is meant the deliberate pushing of hoaxes, propaganda and disinformation, via social media and online news that are intended to incite people into believing them. At the same time, the term is used to refer to anything people happen to disagree with or don’t want to hear. When somone doesn’t like the facts or news they will make out they are fake. For example, the idea that the world is getting warmer is viewed by some as fake – despite the resounding scientific evidence. They will then ‘find’ and ‘generate’ news that ‘proves’ it is not true. But this then becomes clearly fake for the others.

What is fake depends on the eyes of the beholder.

Why is this happening? When people grow up they often look for information that confirms their ideological views, rather than information that comes from reliable sources or science. Increasingly, this entails following links on social media to read stories and watch YouTube videos that support their opinions. Most startling is the outcome of a recent survey by BuzzFeed that revealed that 75% of US adults believed fake news headlines they were shown. Moreover, those who use Facebook for their news feed are more likely to believe fake news headlines as telling the truth than those who read their news from other sources.

If the kinds of fake stories that were being promulgated through people’s newsfeeds were only porkies – like those we read or watch on April Fools Day – it would not be quite so bad. It would be a bit of harmless fun like the classic spaghetti story. Back in 1957, the BBC made a short documentary about the plight of the spaghetti crop that grew on trees in Switzerland. Now that would be laughed at as being ridiculous. Then, many people were fooled – since at the time very few people ate spaghetti outside of Italy, let alone knew where it came from. Indeed, a considerable number of British viewers called up the BBC after watching the programme to find out how they could get hold of a spaghetti tree. They were told to “place a sprig of spaghetti in a tin of tomato sauce and hope for the best” It was later viewed by CNN as the “the biggest hoax that any reputable news establishment ever pulled.” 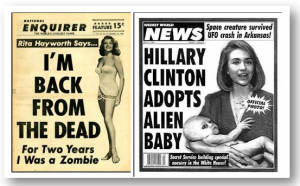 These kinds of hoaxes are harmless. Just like the kinds of ridiculous but funny stories the National Enquirer comes up with each week. In contrast, the increasing spreading of fake news is much darker and more sinister. People really do believe that that global warming is not true, that Hillary Clinton is a criminal, and so on. Please bring back Father Christmas.