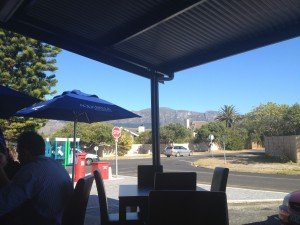 I was having a lovely daydream the other morning while sipping coffee at my local brasserie – that dreamily overlooks the mountains – when I suddenly found myself being drawn to the conversation going on between two guys at the adjacent table. One of them kept banging on about his son Murray. “Murray this, Murray that…” But it was not because Murray had done anything wrong; quite the opposite, he had become a saint.

The guy was very animated because Murray had changed beyond recognition since being introduced to a new learning method. What drew my attention was his description of Murray drawing on a chalkboard that they had put in his bedroom – that covered the whole side of one wall – with whatever was going on in his head. Instead of sitting terrified, clenching a book, whenever his mum or dad asked him questions about his maths homework that he was unable to answer (the guy enacted the mortifying scene grippingly), young Murray now runs upstairs and writes down what he had just read in a book or seen on the TV onto his chalkboard, using “mind maps, whatever, you know that kind of stuff”.

The physical exercise was central. The chap was also on a roll and my ears pricked up more:

“His test results have gone up from being in the 50s and 60s to being in the 70s and 80s. His whole attitude has changed. He’s all left-brain (poor bastard, he gets that from me), but now he has changed completely. Only this morning he was up at 5.45 a.m. drawing on his wall… His mum and I don’t have to shout at him anymore – which never worked anyway. He just does it on his own. And we have changed, too. We no longer nag him “Murray have you done your maths? Murray have you done your homework?”.

And on and on he went. Just goes to show what a chalkboard and a bouncing ball can do to transform a previously dreaded experience into something that is enjoyable. I’ve always been fascinated with how externalizing one’s thoughts changes one’s thinking and the joy that comes from it. But combining it with running around and bouncing balls has enabled the lad to both embody and externalize, leading to his being proactive and excited by learning. 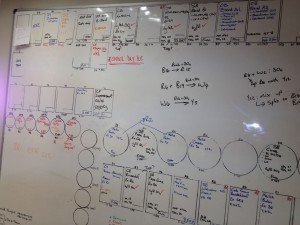 But it is not just learning that can benefit. Big whiteboards remain a pervasive and persistent technology in many walks of life. Ben, the chef I have got to know at Roganic, uses one in his kitchen to write down his half-baked ideas and notes that inspire his new dishes; Adam, the brilliant wine maker we met in Stellenbosch, has a very large one in his wine farm which he constantly consults to remember what state his fermenting wines are in, and which to mix with which. The large diagram of his cellars provide an external and shared resource that extends his mind and offers cues for inspiration.