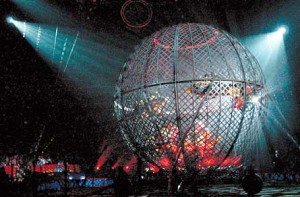 I am always in awe of gymnasts, dancers, trapeze artists, acrobats and the like who perform great feats that defy our sense of gravity and being-ness. How can someone high jump twice their size, walk on a sliver of a tight rope, or do a triple back flip somersault when hanging from a pair of rings? Last summer, when R and I went to see Zippos circus at Hove Lawns we sat on the edge of our ringside seats, gobsmacked as the final act unfolded: three guys on their motorbikes whizzing round and round like flies, upside down and inside out at incredible speed – all in synchrony – in a metal spherical cage called the Globe of Death. One small slip and all three could turn into an inferno. Split-second precision in the face of high risk is everything. 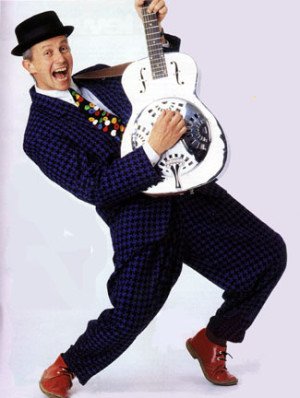 I also love to watch and listen to musicians who turn tradition on its head; inventing novel ways of playing their instruments to create unique sounds. Last night I went to see David Kramer’s Kalahari Karoo Blues at the local Arts Theatre, the Baxter, in Cape Town. The charismatic ageless compere moved around the stage effortlessly in shiny red shoes. While making a documentary about traditional guitar players in southern Africa over ten years ago, he came across some extraordinary ‘other’ musicians on his journey. And so began another journey for him, tracking down some of the most creative musicians to come out of the Kalahari and Karoo. With the help of YouTube he was able to find the most talented ‘hot dry desert’ performers – where it is not precision that counts, but the mastering of quirky instruments in music-defying ways – often home-made, for example making sweet African sounds emanate from tin cans, petrol cans, and coffee-tins.

The eclectic bunch that played at the Baxter included a folksinger from Vredendal – Mary Kriel – who strummed her shiny coffee-tin while whaling melodies from deep within; an 80 plus-year-old – Babsi Barolong – who plays the fenjoro, a handmade tin-violin; and a 30 something-year-old – Oteng Piet – who pretended to have a conversation with his girlfriend when playing a one-stringed segaba that ‘answered’ back life-like replies to his lonesome burblings. The one that stole the show, however, was an energetic 69-year-old – Hannes Coetzee – who jiggled, jerked and danced all through the night, writhing and twisting his body at every opportunity. His piece de-la-resistance was to play slide-guitar using a teaspoon in his mouth while using both hands to play chords and strum, respectively. It was astonishing to watch and wonder how he could get such control and passion from a piece of cutlery. Understandably, Hannes, has become the darling of internet viral fame. Not surprisingly, he has had millions of viewers watch his YouTube videos over the years and many imitators trying to play his unique style of spoon-guitar.

But the performer who really stood out for me was Ronnie from Botswana. A reticent young man who hid in the shadows for most of the evening, but shone like a beacon when it was his moment to play. Instead of making chords by placing his hand below the guitar neck and moving his fingers along the frets, he placed his hand above the guitar neck and moved his fingers, as if he was playing a piano, while strumming with his other hand. The technique is known as upside-down knyp-en-pluk. And the guitar is tuned to the key he likes to play – rather than the more common ‘Eddie Ate Dynamite Good Bye Eddie’.

The effect was to create a rich, warm, eerie multi-layered sound, that when coupled with his powerful voice, was sublime. Occasionally, he used his elbows to slide up and down the frets; and at one point lifted his guitar behind his head and carried on playing without looking. It was a remarkable spectacle. Even more extraordinary, is this fine young man had never been out of Botswana (until this performance), does not speak a word of English and yet has had over 2 million views on YouTube, featuring on the Bokete7 channel. While he lacks the infectious stage presence of Hannes Cooetz – he is just as mesmerizing, watching his fingers, elbows and voice do the talking.

The viral fame of these remarkable African musicians from the Karoo reminded me of the PSY phenomenon that occurred before Christmas last year when the then unknown Korean rose to stardom with his compulsive viewing, YouTube video, Gangnam Style. Over the festive period he reached a staggering billion views. One thousand million people from all over the globe watched him jiggle around and pretend to dance like a two-legged horse. Extraordinary.

Why are we drawn to these performers? Part of their attraction is how different they are from the rest of us – they create something unique by breaking away from the mold into a new space, that is ever more dangerous, daring, unusual, quirky, body-defying, and truly amazing…