Warning: Use of undefined constant core_mods - assumed 'core_mods' (this will throw an Error in a future version of PHP) in /nfs/c06/h02/mnt/186971/domains/interactiveingredients.com/html/wp-content/themes/interactive-ingredients/functions.php on line 14
 About Time - Interactive Ingredients 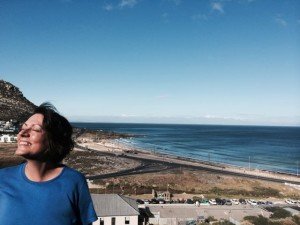 My dream fellowship has now officially ended. I’ve returned to Cape Town where it first started, two years ago. The original plan was to come back for a short time to reflect on what I have done and achieved during it. In looking back I realize I am all the time looking forward. Dreams of how to change the world don’t stop when the funding stops. They take a new turn, changing direction; expanding, contracting and transforming.

But life can suddenly stop, short. My wonderful host, gentle colleague and dear friend in Cape Town, Gary Marsden, died suddenly and unexpectedly on the 27th December, aged 42. He, too, had a dream of how to change the world. But we’ll never be able to share our respective dreams, again, over a coffee looking up at Table Mountain. Instead I am here to attend his memorial service – which was held this week at the University Cape Town. It was a wonderful remembrance for a very special person, and a befitting way to say goodbye. But I still can’t stop thinking why. There is so much one wants to hold onto in grief. So much said, so much missed, but ultimately, so much that could have been more.

The other night I watched a movie by Richard Curtis called ‘About Time’ on DVD with some of his close friends. The storyline is simple but its ramifications made me think about how we traverse through our lives. The protagonist, a young man called Tim, discovers he can travel back in time in his life. While he can’t meet people outside of his lifetime, like Hitler, he can change what happens in his own life. This he does by trying to make his life better through the encounters he has with others. We first see him fumbling and bumbling in real life; he has many missed opportunities and never seems capable of saying or doing the right thing. Then we see him trying to ‘get a girlfriend’ (which he has failed so far in real life because of his social ineptness) by going back in time and making better moves in less cringe-making ways – and he learns how to act out the dream of classic romance.

Towards the end of the movie, there is ‘a one day in the life of’ episode where it begins, predictably, with it going wrong in real life for Tim. Then the episode starts again playing out exactly the same scenes, but where the characters’ reactions and interactions with each other are different. Instead of reacting to annoying and disappointing events like he did the first time, by getting annoyed and disappointed, himself, Tim turns them around to be joyous. He does not get rattled by the person sitting next to him on the Tube, who has tinny, ‘kchunkie-kchinkie’ music seeping out of their earpods (as he does first time), but smiles and even starts singling along with the ‘shared’ music. Instead of replying to his wife, as he gets into bed, that he has had a bad day he says he has had a good day. She smiles and says well in that case no need… but then he quickly gets it and follows up by saying ironically he has had a really, really bad day. And she turns to him and smiles and says well in that case… And then it is smiles all round.

Of course, no-one can ever sustain a life of full-on happiness. It would be saccharin-sick even if it was possible. We would start craving misery if all we had was 100% happiness.

For the most part, living is about making a myriad of often unconscious, split second decisions, choices and reactions to what is happening around us. We might think we can think ahead about what we want to say and do but in most situations we can’t control what we say and do. Most of the time we react and interact. Our paths and encounters with each other always have an unpredictable element. We can never be sure how the other/s will respond or what they will feel. Their body language, the switches and turns in a conversation, the unexpected looks, smiles, the endings, the jibes and much more – often take a course of their own.

Not knowing what twists and turns are around the corner, surely, is one of the joys of life.

Some of us are better at taking command and some of us wish we had more courage to say or do things we just can’t do. Sometimes we fumble and make a mess of it – just like Tim does at the beginning of the movie when not knowing whether, when or how to kiss a girl. Some of us are super sensitive and over aware – agonizing over whether we have done the right thing, said the right thing, looked too long in the eye at someone and on and on. Some of us just don’t notice what others are thinking or feeling. Some of us can read each other’s minds and moves in uncanny ways.

Empathy is one of the great gifts of life.

Even if we could go back in time and have a second bite at the cherry it would surely be unbearable to know what lay ahead of us. That is why fate and serendipity play such an important role in life and literature. And now it is ‘about time’ for me.